Kulay : Baybayin has been a decade long project when Kristian started teaching Baybayin. In 2009, Ray Haguisan of Malaya Designs and Kristian started doing the Pistahan Festival in the San Francisco Bay Area where they created worksheets with Baybayin words that kids can color. Since then he's had other kid related activities from art, writing workshops and toy shows at various Filipino festivals,  Asian Art Museum, Sama Sama Coop and the Philippine Embassy in Belgium.

Why a coloring book? Everyone starts out as an artist. As children, it's one of the first things we do to express ourselves and be creative. As we get older, we're trained to loose that self-expression and creativity. By the time we get to adulthood, it's mostly gone. This project allows one to rediscover that inner child in them. Explore something new. Start a legacy for your kids, future kids and the community. 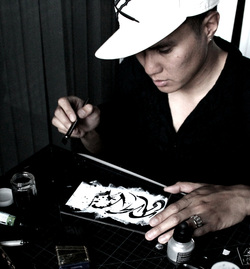 Kristian Kabuay was born in the Philippines and raised in the San Francisco Bay Area. He spent his college years in the Philippines where he honed his knowledge about the native ancient writing system, Baybayin. Kristian is a self-taught artist influenced by calligraphy, graffiti, abstract art, indigenous culture, technology and Asian writing systems.

As a leading authority for the propagation and instruction of the Philippine script, he developed a modern performance style of the writing system called Tulang Kalis (Poetry of the Sword) and introduced it as Filipino Calligraphy with a series of live demonstrations and lectures at the Asian Art Museum in October 2012. He has spoken at numerous schools and institutions such as Stanford University, UC Berkeley, SF State University, UC Davis, Sonoma State, University of the Philippines, National Anthropology Museum of Madrid, Tokyo University, and the San Francisco Philippine Consulate.
Currently based in San Francisco, Kristian tirelessly advocates a reawakening of the indigenous spirit through decolonization and Baybayin. Conscious of his role, Kristian launched his own company around the script specializing custom art, translations, books and apparel. This lead to collaborations with t-shirt, hat and skateboard companies. Kristian completed a European tour of Paris, Madrid, London and Brussels in July, 2013 and is currently working on an online school and documentary.
© 2014 All rights reserved - Baybayin LLC